Incredible. I almost feel like that’s all I have to write. But then I know that you, the reader, would not possibly get any sense of  journey I actually took during Portsmouth Beer Week at The District. And, frankly, that would be completely selfish and unfair of me to not share appropriately. So…away we go!

The District owner, David Takis, informed me that Bill Herlicka and Brain Parda of White Birch Brewing approached them a week before the dinner was held, with beer in hand and an idea in mind. David, being a fan of White Birch was immediately on board. Sure, the short time line might have had any other restaurant owner shaking in his boots, but David has an amazingly talented and not-so-secret-weapon in his kitchen named Ian Thomas: executive chef since The District opened in July of 2011. David, who refers to Ian as “insane, but genius”, brought the selected brews to his chef who tasted each one once and then wrote the four course menu in a day, having been inspired by the flavors of White Birch. 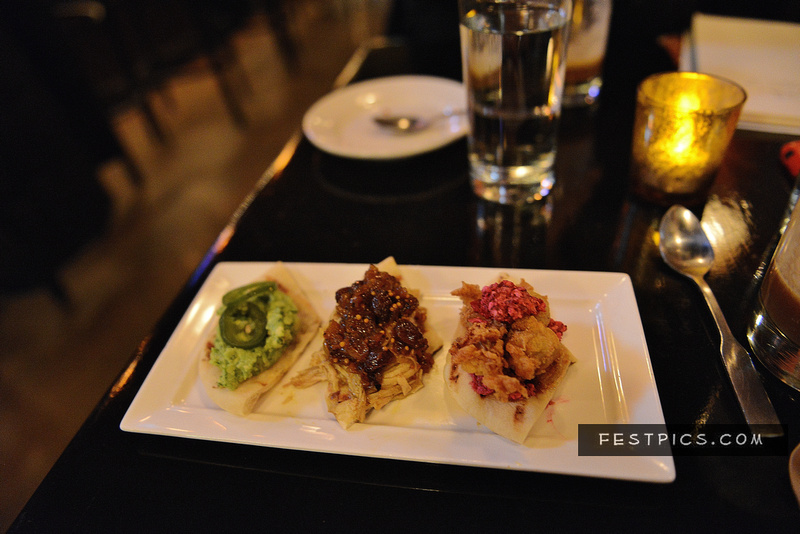 The first course was a trio of flat breads with such exotic flavors as creamy avocado with spicy jalapeno, an Indian inspired curry of mango, raisins and onion and a fried oyster flat bread with feta and pepperoncini tapenade paired up with White Birch’s Belgian Pale Ale (ABV 6.3%). What was so great about this pairing was both the avocado and oyster flat breads had some heat to them that the BPA quite easily cut through while the sweetness of the curried flat bread really allowed the more subtle hop character in the BPA  to come to the forefront of the flavor and stand out sip to sip. Being able to taste anything but curry is a difficult task, as normally I find it to be such a strong flavor that it nearly ruins my capacity to register anything else during a meal. Add to that the heat this first course brought and it makes for a bold first move. Bold but brilliant.

The second course featured White Birch’s Hooksett Ale, their Belgian IPA. I’ve had this beer plenty of times (heck, I’ve even served it a few times!) and know it to be delightfully hoppy, yet surprisingly not boozy in flavor despite the large 8% ABV.  This came paired with a pork short rib with pineapple and habanero bbq sauce with grilled onions.  The intensity of the habanero sauce was countered by the hops of the beer which were then perfectly balanced by the sweetness of the pineapple. The layering of the palatal experience in this one dish was nothing short of culinary genius. And then, there was still absolutely amazing piece of pork that just melted with the touch of a fork tine and elegantly presented wrapped in a leaf. This may have been the most incredibly tender piece of pork I have ever had the tactile pleasure of experiencing.

Course number three featured White Birch’s Rusalka: a multi-grain extra stout coming in at 6% ABV. I’m just going to stop right here and give White Birch a virtual high 5 on this one. This was the first time I’d had this beer and it was heavenly! Flavors of roasty grain, light char and CHOCOLATE!!!

But wait…Chocolate with dinner? That sounds more like dessert. How could this be something I’d want with savory dinner flavors? Here comes our culinary master Ian Thomas again. Chocolate for dinner was perfect when enjoyed along side buttermilk fried squab and braised swiss chard served with a sweet potato waffle drizzled with cherry balsamic reduction. The beer was an incredible balance of sweetness from the malt and the bitterness of the char. This balance was then mimicked on the plate by the sweetness in the sauce and waffle and the salty, crispy buttermilk breading  and the oiliness of the squab. Both the food and the beer carried an equilibrium between sweet and savory flavors, and no better match could have been made between these two. This was definitely the pinnacle of the meal for me.

Finally, we reach the dessert course. Now, we’ve already seen a beer that carries chocolate flavors put brilliantly into a main course. Wouldn’t it have made more sense intuitively to put that beer in the dessert course? Surely that’s what you or I would have done (you know, if we had gone to culinary school and worked at a creative, new American dining establishment). But this is why David refers to Ian as “insane, but genius”. He could have gone the obvious route and put that stout in the dessert….a chocolate stout cake perhaps? But Ian took one sip of White Birch’s Ol’ Cattywhompus, 9.1% ABV English Barleywine and instantly thought “dessert”.

Try this on for size: Ol’ Cattywhompus Barleywine ice cream float with banana coconut ice cream and topped with toasted marshmallows. One of the most incredible, flavorful, and pleasing ends I’ve ever had to a meal. This dessert had it all. It quelled my sweet tooth with out over doing it, rounded out the flavor experience and packed a nice, warm alcohol punch. Normally after dessert I find myself saying “why did I just eat that? It was so rich and I’ve over done it”. This one had me saying “Please, sir, may I have some more?”

I really don’t know what other adjectives to use other than incredible, amazing, sensational or fantastic. This meal was far and above any other beer dinner I had attended previously. I am a massive fan of White Birch Brewing out of Hooksett, NH and have been for some time. I think that their decision  to collaborate with the culinary talent of Ian Thomas and the creative direction of David Takis at The District (who pride themselves on using local ingredients in all their culinary creations to support local economy) was the perfect marriage of beer and cuisine. And how glad I was to be there to enjoy the fruits of this labor.

Before I end this, I wish to give special thanks to bar manager Jay Milligan for taking such good care of us that night. And to Mike Johnson for being my dinner partner and photographer on the scene. And I will leave you with this tid bit: if this recount of my beer dinner experience leaves you salivating and finds you wishing you had been there, fear not. Rumor has it that this is the start of a beautiful friendship between White Birch and The District and a prelude to a summer beer dinner series. Stay tuned….