Our Journey from Ottawa to Portsmouth (part 1)

This is a guest blog post by April Thibert. We were happy to meet April and her crew during Portsmouth Beer Week this past February. To celebrate American Craft Beer Week, she would like to share her journey with you. Enjoy!

A simple headline in my RSS feed set things into motion. In October, after visiting New Hampshire and taking in many of the local breweries I promptly returned to Ottawa and began following every brewery I could find on as many forms of media as possible. Imagine my delight and disappointment to learn about all the new and exciting things happening in New Hampshire’s craft beer scene and my inability to enjoy them on a daily basis.

So when I read the headline – “2013 Seacoast Winter Brew Fest” – I followed the link to learn more. Not only was there to be a winter brew fest but it would lead to the Portsmouth Craft Beer Week. Even more intrigued I followed the link to the calendar of events. Immediately I began to wonder if it was a trip we could make. Instead of a weekend we could have a whole week celebrating great craft beer and enjoying a beautiful state.

I began to keep tabs on the events as the list grew. Each one that was added just made a more compelling argument for the trip. I mentioned the Winter Brew Fest and beer week to our friend in New Hampshire. His words, “Is it enough to make my two favourite Canadians come and visit?” My husband and I looked at each other and decided that yes, it most certainly was.

Vacation time was booked and I began a list of the events we wanted to attend. I was pleased to find out that many were walking distance from each other. Timing was also important and while not many overlapped some did and choices had to be made. The plan was altered a few times as we tried to fit as much in as we could without overdoing it and risking getting “beered out.” (I know, it seems far fetched but it can happen.)

First up was the 11:00 am VIP Session of the Seacoast Winter Brew Fest. The list of breweries was impressive and the VIP allowed us tastings of rare whiskey, bourbon and scotch. The fest did as promised and we spent four hours sampling some great beers and spirits. Everyone we talked to was friendly, knowledgeable and engaging. Some beers stood out with Allagash’s FV 13, Dogfish Head’s Bitches Brew, Sam Adam’s Vixen, Great Rhythm Resonation, Widmer’s South by Northwest being just a few.

Sunday found our trio sitting at Earth Eagle sampling their beers. We tried all six of their offerings. The New England Gangsta and Chinese Rock were the favourites though I can honestly say all six were very much enjoyed. The company was great including one of the brewers and another couple who were craft beer fans.

That afternoon we made the walk to RiRa’s for the Rollin’ Out the barrels. Sam Adam’s and Smuttynose were hosting the kick off to beer week with some rare beers. Here again the event’s description did not disappoint. The bar itself is not to be missed (an old jewelry store that has kept the beautiful elements including the ceiling and vaults) and the beers were great. We had a chance to chat with Bill Harris from Smuttynose and Mike Lianza from Sam Adam’s. Both were great guys to talk to.

Monday we arrived at Thirsty Moose for the Founders tappings. The bar itself was not my favorite of the trip though their selection did help make up for the marginal service and ambiance. We ran into Bill Harris from Smuttynose. He gave us a few tips for restaurants to visit, including the event at the Black Trumpet. Admittedly we had been torn between the East vs West event or that one but Bill’s recommendation on the food was enough to sway us. We settled in for a shared flight and some individual pints. Highlights included Founders Centennial Ale, Monk’s Cafe Flemish Sour Red Ale and Rogue Chocolate Stout. 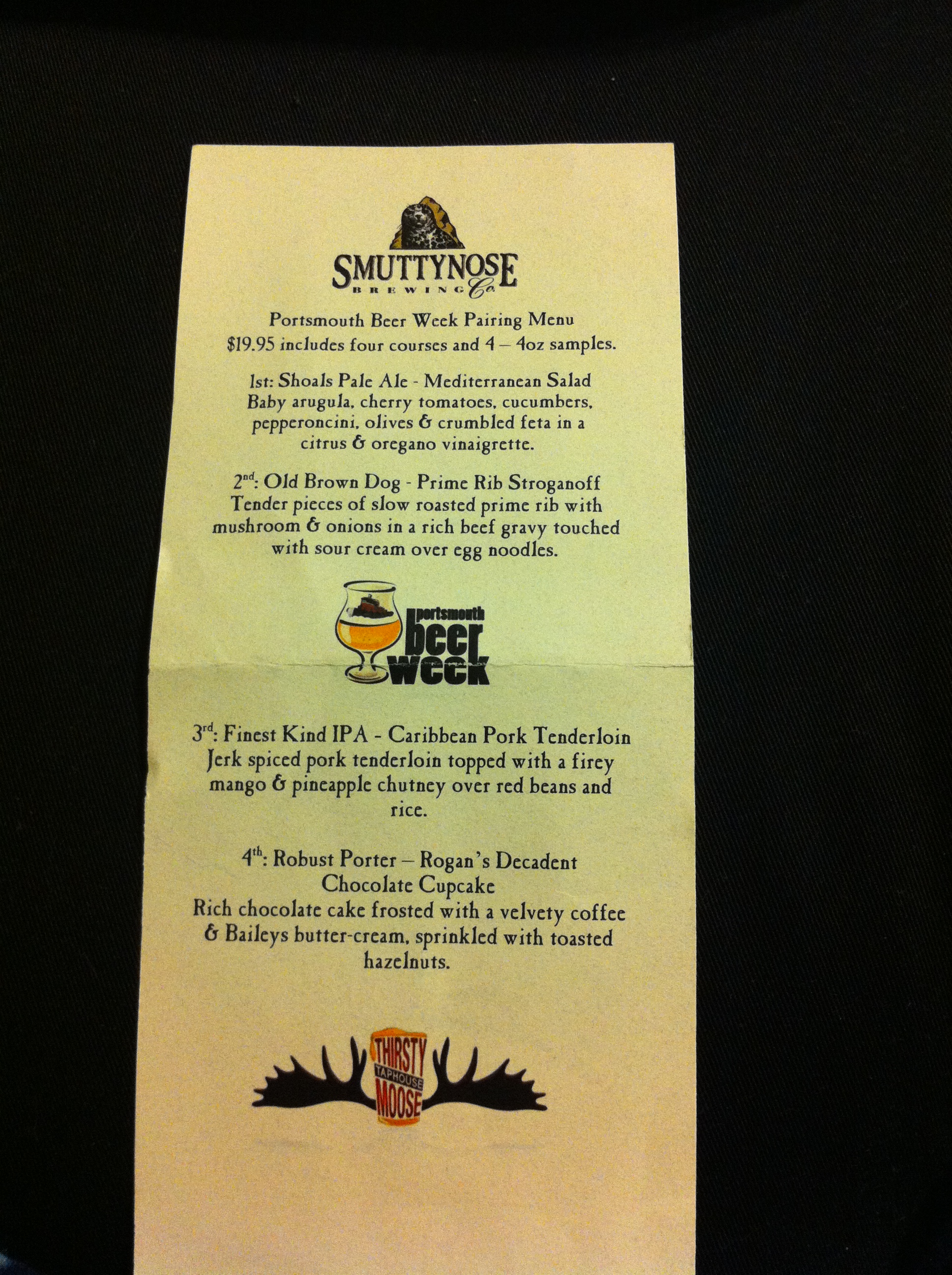 We were not steered wrong. The menu for the Early Blooms tap takeover was amazing. We tried Smuttynose Paradox, Durty, Bloom and the Robust Porter. Each was paired with two small plate tastings that were perfectly matched to the beer. Highlight was the butterscotch pudding with molasse whip that was paired with the robust porter. The group was in complete agreement that all the beers were excellent.

The next day was bright and sunny. We spent the morning snowshoeing before heading back to Thirsty Moose for the Smuttynose food and beer pairing. Good price and interesting mix. Not all the dishes matched as well as I had hoped but overall it was good quality. The highlight for me was the stroganoff while my companions favoured the jerk pork tenderloin and the chocolate cupcake.

We took the short walk to TJ’s for the IPA tap takeover. The best part of a group of three is everyone can order something different and drinks can be shared so that everyone gets to taste them. This is the strategy we employed after looking at the list of fourteen different IPA’s. Standouts of this delightfully hoppy night included Stone Ruination, Bengali Tiger and getting to try Sam Adam’s Grumpy Monk on tap versus the bottle. 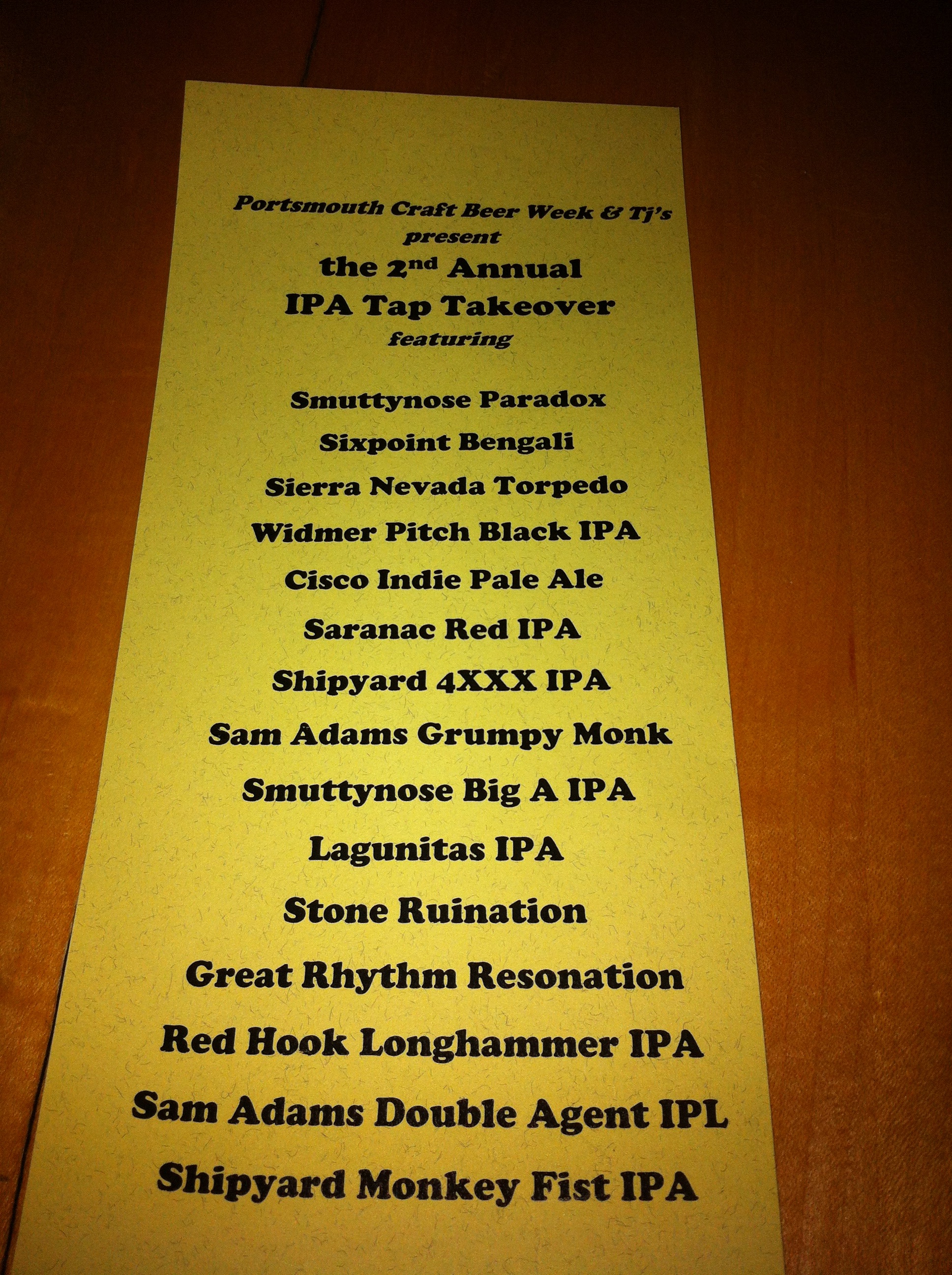 Come back tomorrow to hear the rest of this amazing adventure! 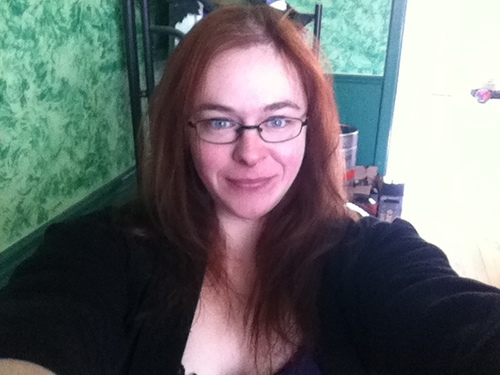