During the 31 days of December, we will be sharing our favorite regional/winter seasonals/holiday beers with the help from our fellow beer enthusiasts. We hope that you tune in every day, to hear our stories and share our holiday cheer! 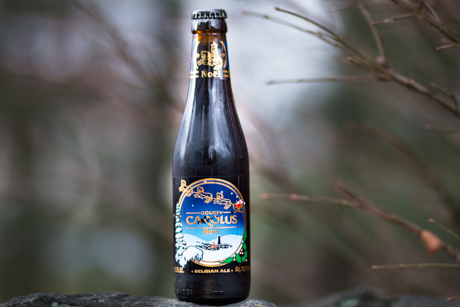 Commercial Description:
For more than 35 years we had to miss the Christmas beer but in 2002 the tradition was restored with Gouden Carolus Christmas. It’s a strong, dark ruby red beer with character and contains an alcohol percentage of 10.5 % alc.vol. Brewed in August, the beer rests a few months to reach an optimal balance. Three kinds of hops and 6 different kinds of herbs and spices define the rich taste of this Christmas beer. Top-class!

Why I selected Gouden Carolus Christmas:

There’s never any shortage of new winter/Christmas/holiday beers popping up every year. My go-to favorite every year is the Sierra Nevada Celebration, but I wanted to do something established that I’d never seen before, nevermind tasted. With that in mind, I sought out something in that vein and came across this Belgian dark ale from Brouwerij Het Anker in Mechelen, Belgium. It has the color of garnet and it’s appearance is indicative of it’s strength. At 10.5%, it is well-served in the 11.2 oz bottle so as not to overindulge. The aroma is filled with dark fruit and spice, along with some licorice. It has a substantial body with flavors of sweet dark cherries and copious waves of alcohol. A fine, fireside sipping Christmas beer that is decidedly old-school and traditional. A lovely find, and sure to warm both your body and senses on a chilly evening.

HISTORY
At the beginning of the 15th century, the beguinage of Mechelen had a strong presence in the town. The beguinage possessed an important “hospital” which is located at the present brewery. Some of the buildings date from the 15th and 16th century, like the old St. Bernardus shelter house of the abbey of Hemiksem.

In 1471, Charles the Bold decided that “the beguines and officers” shouldn’t pay any excises and taxes on the beer brewed for the hospital.

In 1872, the family Van Breedam bought the brewery and built a modern brewery with a steam boiler. The love for this profession and the fascination of the family Van Breedam in the heyday of Mechelen during the reign of the Dukes of Burgundy, are the foundations of the return to traditions and the brewing of special beers.

In 1990, Charles Leclef, fifth generation of the Van Breedam family took over the brewery and modernized the brew equipment.