Here’s a new beer law story.Â  This ones originates in Colorado.Â  From the information provided, there is legislation in the mix to allow the sale of full-strength beer at grocery and convenience stores.Â  Currently, only beer lower than 3.2% can be sold.

I understand that this will take sales away from the liquor stores, but I think that this is a great opportunity for Craft Breweries.Â Â  In Mass, many grocery stores can not sell beer or wine, unless they have been grandfathered in.Â  But, we are on the border of NH — who is able to sell beer in grocery stores.Â  The grocery stores are helping to keep the craft breweries stay afloat — if you can get into them.

Knowing that Colorado is one of the MAJOR craft beer producers in the US, this could be a boost for the breweries to increase their production and expand their operations.Â  Yes, this will increase the availability of macro breweries, but I see this more as an opportunity than a threat.

If you have an opinions, please add a comment.Â  We welcome those for and against this proposal. 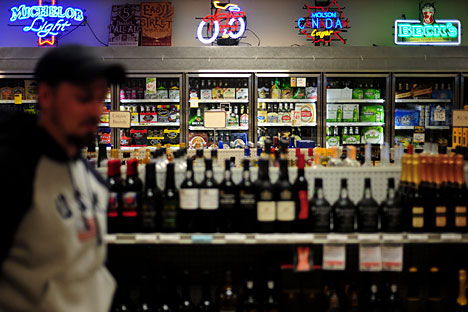 Grocery and convenience store owners say their beer sales dropped dramatically after lawmakers allowed liquor stores to open on Sundays. Now, they want to be allowed to sell full-strength beer, rather than just 3.2 beer.

Independent liquor store owners and small craft breweries, though, say theyâ€™ll be harmed or forced to close if the law is changed to allow consumers to buy full-strength beer at grocery and convenience stores.

After liquor stores started opening on Sundays last July, sales of 3.2 beer at grocery and convenience stores dropped 66 percent, according to Sean Duffy, a spokesman for the Rocky Mountain Food Industry Association.

That group and others are behind state legislation expected to be sponsored this session by Sen. Jennifer Veiga, D-Denver, and Rep. Buffie McFadyen, D-Pueblo West.

If the legislation passes, Wallace said, independent liquor stores â€” whose percentage of beer sales is much higher than liquor or wine sales â€” wonâ€™t be able to compete with the lower prices on beer that national chain stores will be able to offer. Also, he doesnâ€™t think chain stores would devote as much shelf space to smaller breweriesâ€™ products, so some craft brewers wonâ€™t be able to get their products in stores.

John Bui â€” owner of Westview Liquors, near Albertsons on North Main Street â€” said he sees other reasons why the legislation is a bad idea. Minors would find it easier to buy beer, he said, because grocery store personnel donâ€™t go through training as liquor store employees do.

â€œIâ€™ve got a feeling there are going to be more accidents because, of course, theyâ€™re selling cheaper, easier products, easier access to those products, (and) more kids are going to get drunk,â€ Bui said.

But Duffy said those arguments donâ€™t hold up. The upcoming bill would allow beer sales only at grocery and convenience stores, and liquor stores would be the only stores to sell liquor and wine.

â€œWe took that argument very seriously a year ago, and at that time we were asking for beer and wine,â€ he said.

He also dismisses the argument that allowing grocery and convenience stores to sell full-strength beers will hurt smaller brewers, calling that argument a â€œdefeatist hypothetical.â€

Instead, changing the law would open up a huge new market opportunity for the smaller brewers, he said.

Sen. Brandon Shaffer, D-Longmont, was one of the sponsors of last yearâ€™s proposal that would have allowed grocery and convenience stores to sell beer and wine. That bill died in committee.

Shaffer said he hasnâ€™t decided whether heâ€™ll support this yearâ€™s proposal but said heâ€™s sympathetic to both sides. Heâ€™s particularly sensitive, he said, to doing anything that could harm craft brewers, of which Longmont has two: Left Hand and Oskar Blues.

Given the economic situation in Colorado and nationally, he said, he and his colleagues have more pressing issues to focus on this session, including creating jobs, transportation, infrastructure and education.

â€œThis doesnâ€™t really hit the heart of the agenda, if you will,â€ Shaffer said.